After getting some muslin dyed and trimmed to placemat size, I embroidered them with spider web brackets and dancing skeletons and then quilted them on my longarm. I would have liked the skeletons to be a bit bigger but I was limited by my embroidery machine (which I’ve since remedied). I’m quite tickled with how they came out! 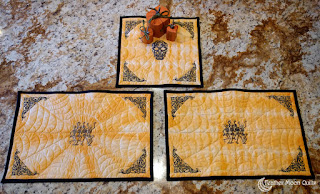 One thing I will do on future place mats, however, is preshrink the backing fabric. I dyed the orange pieces in super hot water so they shrunk, but I totally forgot to do the same to the muslin on the back, so when I washed these after this photo was taken, I was surprised at how much smaller they were.

Lesson learned! They’re still useful as place mats because I made them huge in the first place, but still, I would have liked them to stay huge. I also used some mystery batting that a customer gave me which may have contributed to the problem. 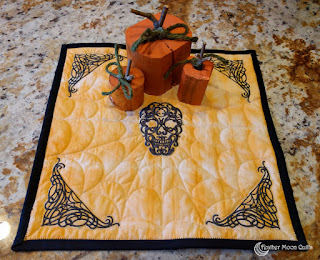 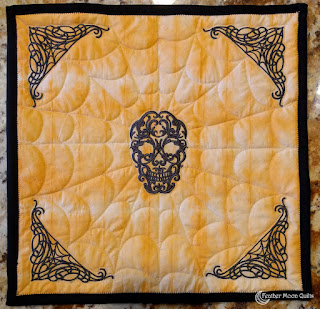